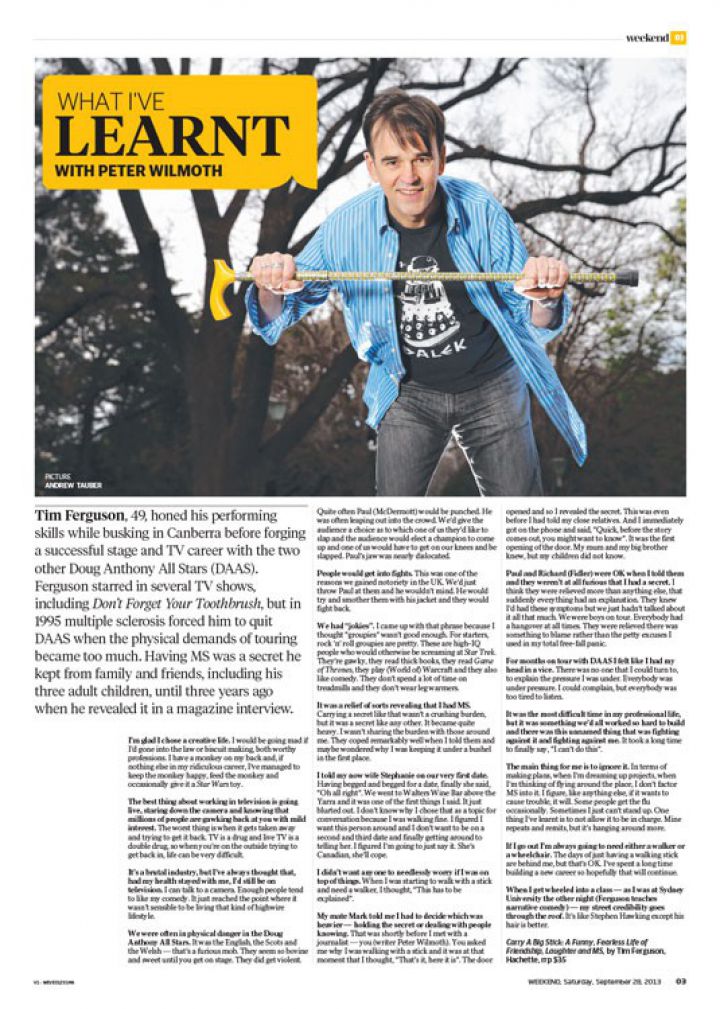 Tim Ferguson, 49, honed his performing skills while busking in Canberra before forging a successful stage and TV career with the two other Doug Anthony All Stars (DAAS). Ferguson starred in several TV shows, including Don’t Forget Your Toothbrush, but in 1995 multiple sclerosis forced him to quit DAAS when the physical demands of touring became too much. Having MS was a secret he kept from family and friends, including his three adult children, until three years ago when he revealed it in a magazine interview. 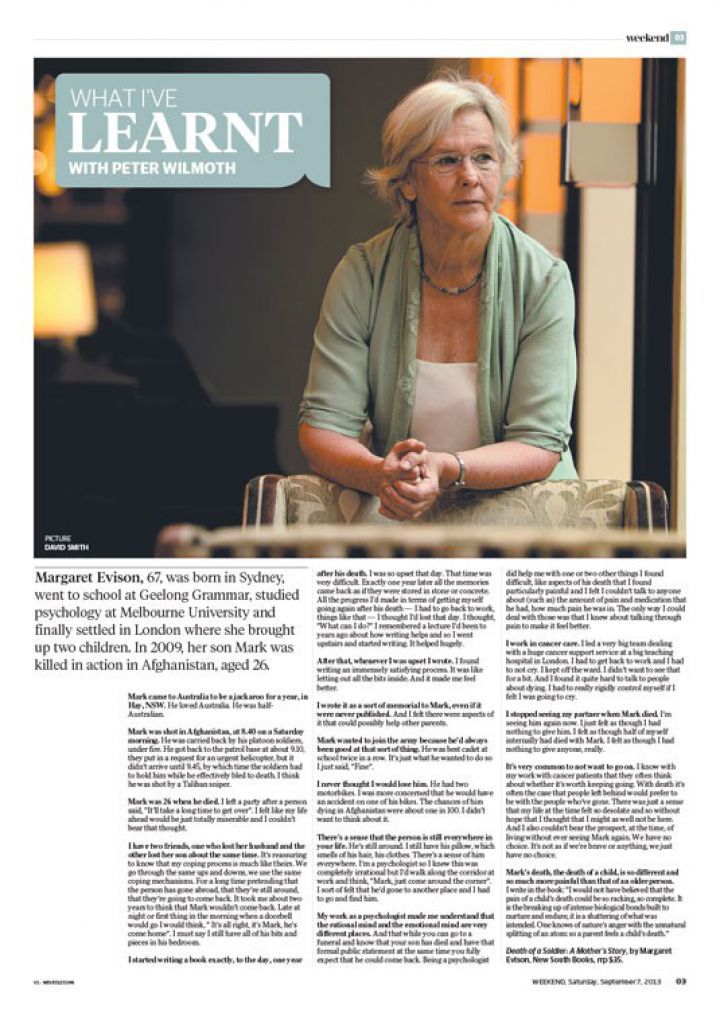 Margaret Evison, 67, was born in Sydney, went to school at Geelong Grammar, studied psychology at Melbourne University and finally settled in London where she brought up two children. In 2009, her son Mark was killed in action in Afghanistan, aged 26. 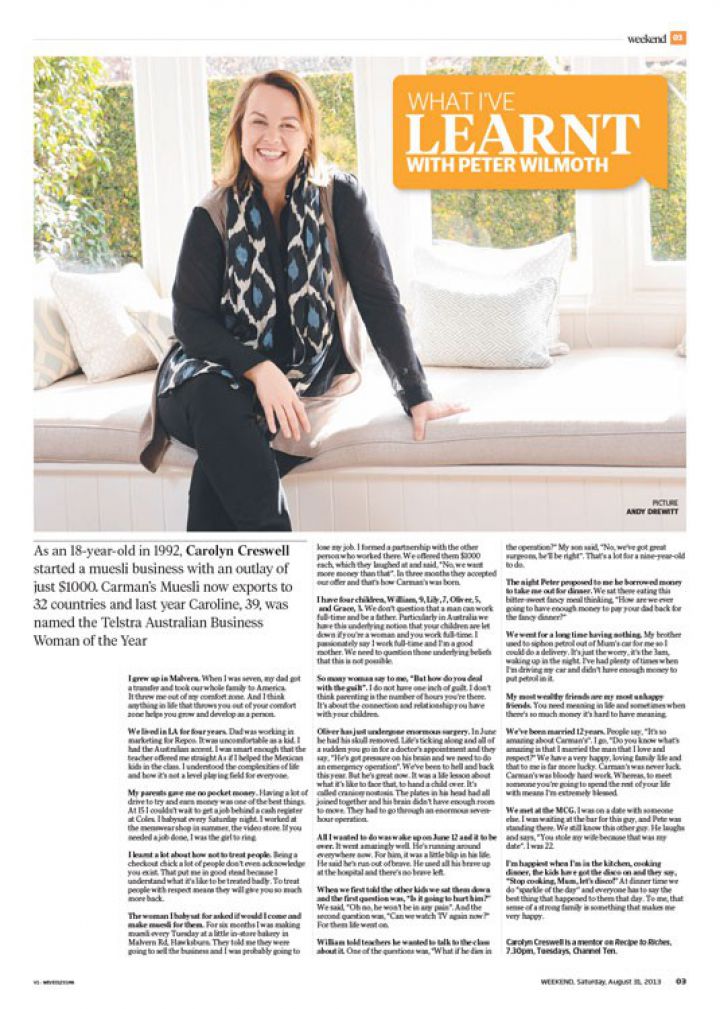 As an 18-year-old in 1992, Carolyn Creswell started a muesli business with an outlay of just $1000. Carman’s Muesli now exports to 32 countries and last year Caroline, 39, was named the Telstra Australian Business Woman of the Year. 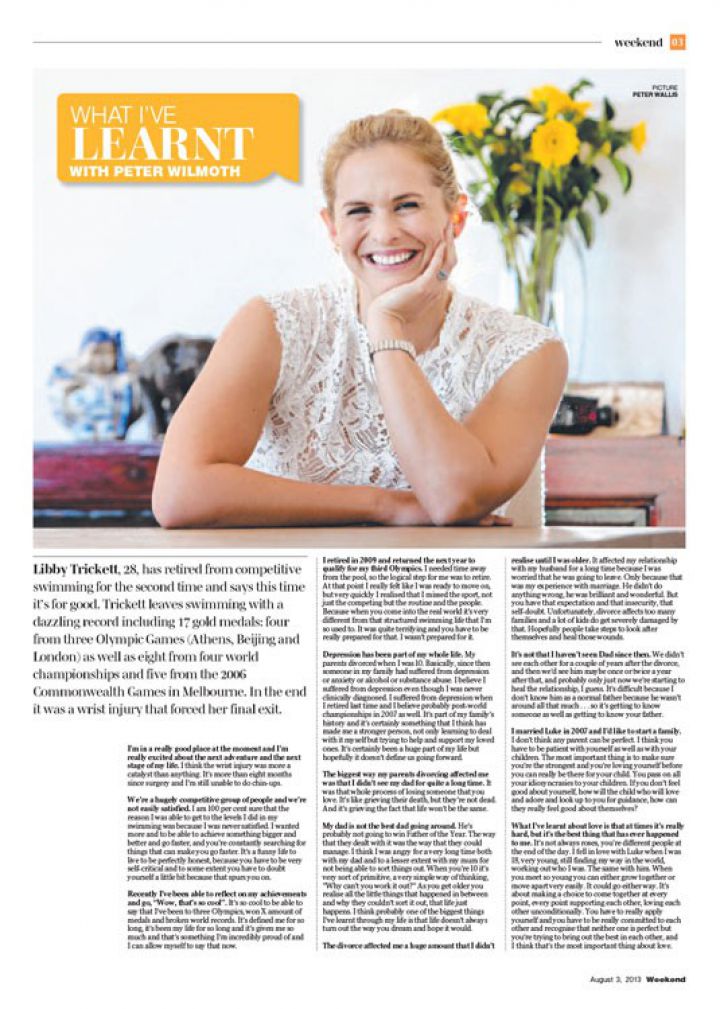 Libby Trickett, 28, has retired from competitive swimming for the second time and says this time it’s for good. Trickett leaves swimming with a dazzling record including 17 gold medals: four from three Olympic Games (Athens, Beijing and London) as well as eight from four world championships and five from the 2006 Commonwealth Games in Melbourne. In the end it was a wrist injury that forced her final exit. 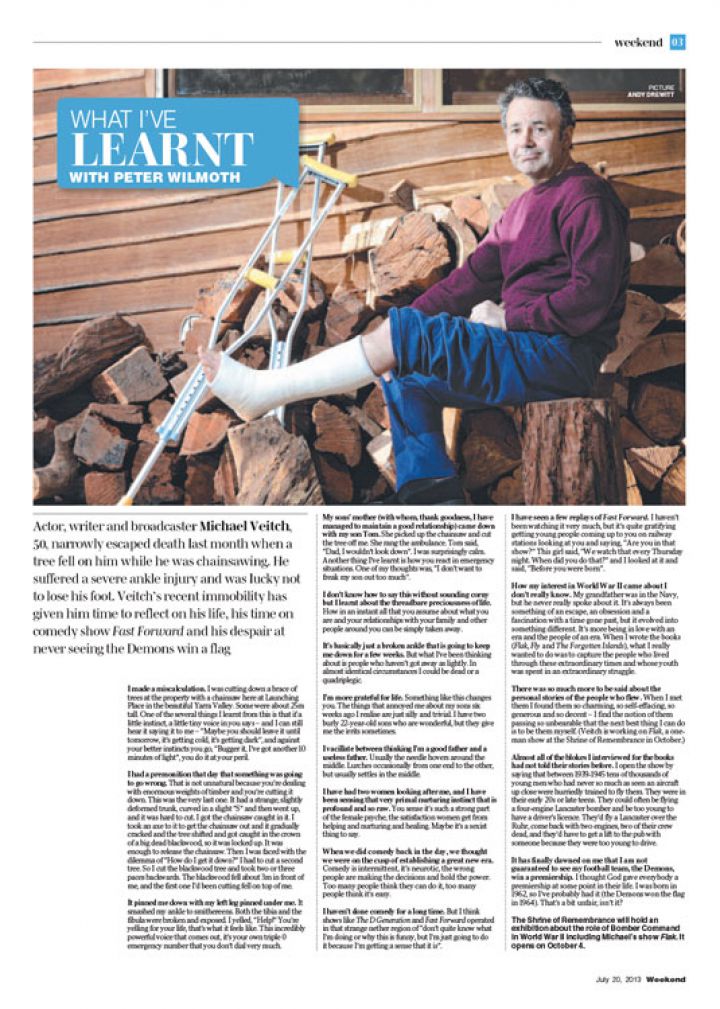 Actor, writer and broadcaster Michael Veitch, 50, narrowly escaped death last month when a tree fell on him while he was chainsawing. He suffered a severe ankle injury and was lucky not to lose his foot. Veitch’s recent immobility has given him time to reflect on his life, his time on comedy show Fast Forward and his despair at never seeing the Demons win a flag. 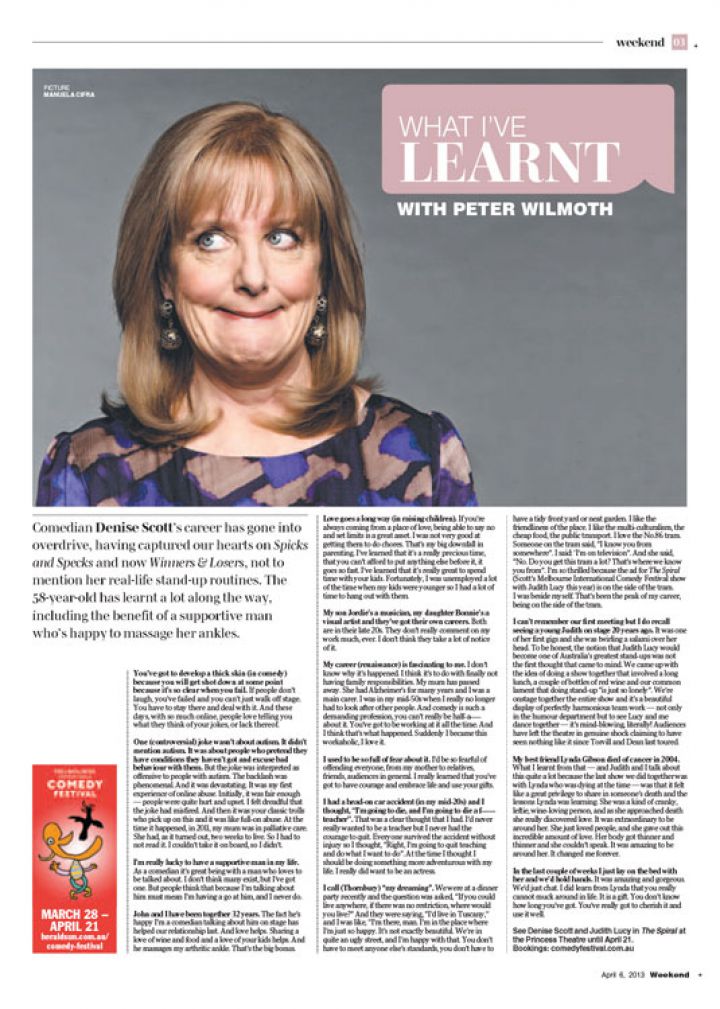 Comedian Denise Scott’s career has gone into overdrive, having captured our hearts on Spicks and Specks and now Winners & Losers, not to mention her real-life stand-up routines. The 58-year-old has learnt a lot along the way, including the benefit of a supportive man who’s happy to massage her ankles. 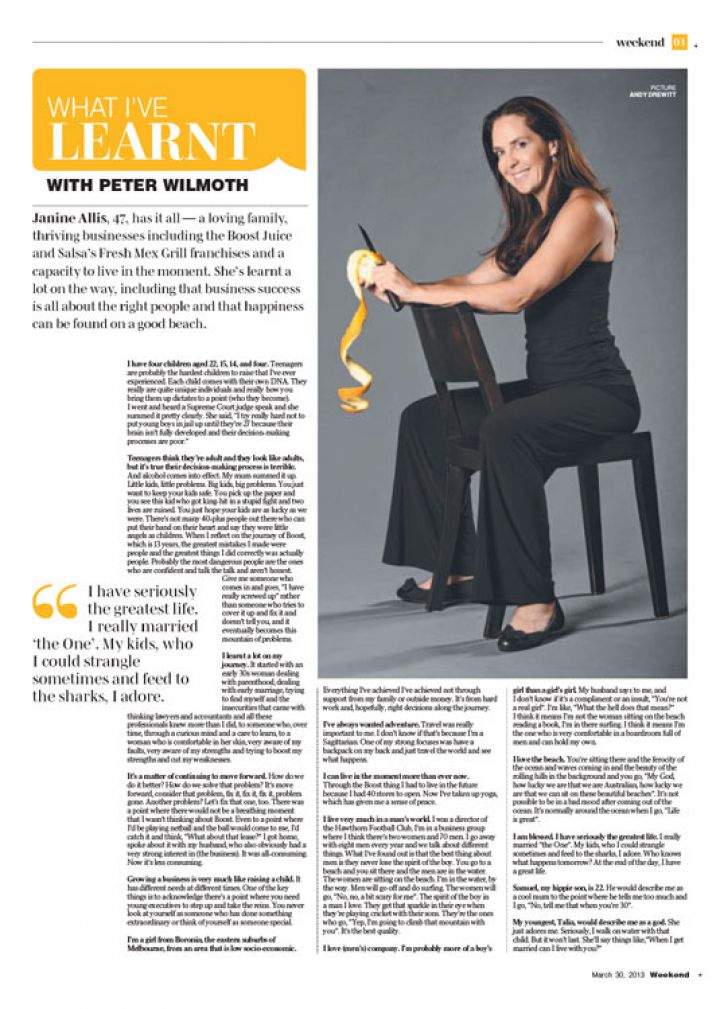 Janine Allis, 47, has it all — a loving family, thriving businesses including the Boost Juice and Salsa’s Fresh Mex Grill franchises and a capacity to live in the moment. She’s learnt a lot on the way, including that business success is all about the right people and that happiness can be found on a good beach. 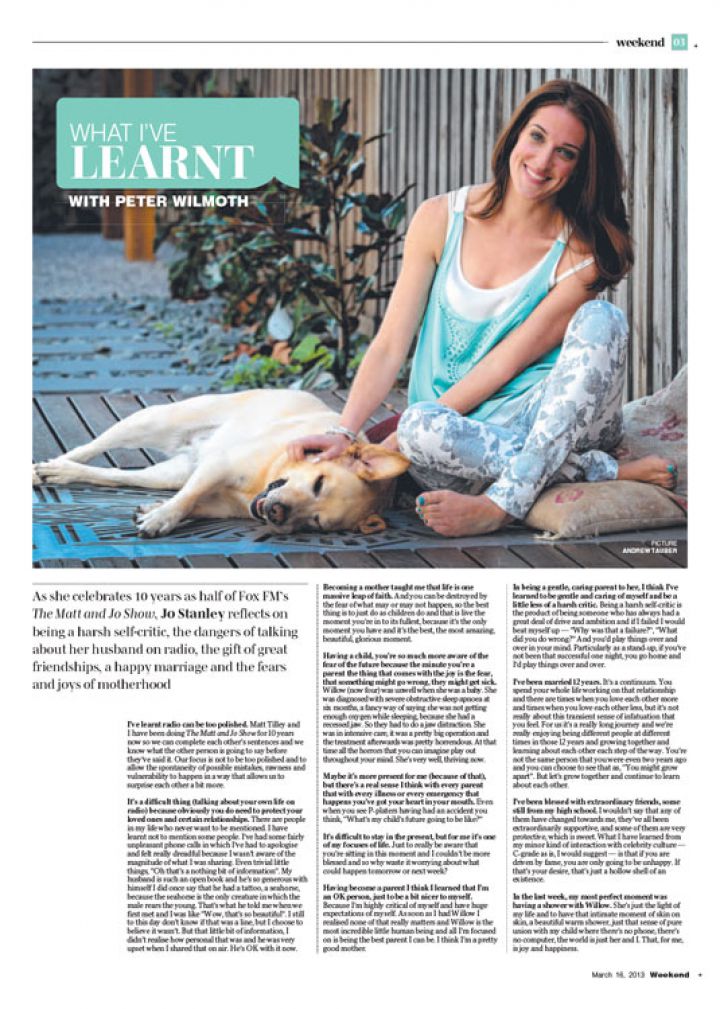 As she celebrates 10 years as half of Fox FM’s The Matt and Jo Show, Jo Stanley reflects on being a harsh self-critic, the dangers of talking about her husband on radio, the gift of great friendships, a happy marriage and the fears and joys of motherhood. 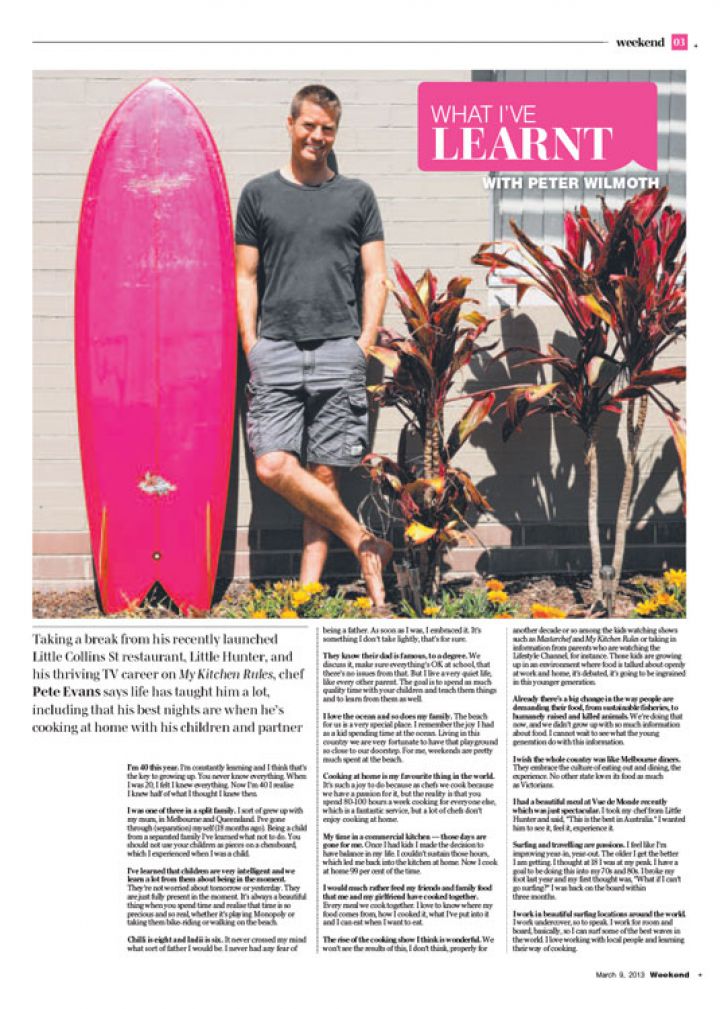 Taking a break from his recently launched Little Collins St restaurant, Little Hunter, and his thriving TV career on My Kitchen Rules, chef Pete Evans says life has taught him a lot, including that his best nights are when he’s cooking at home with his children and partner. 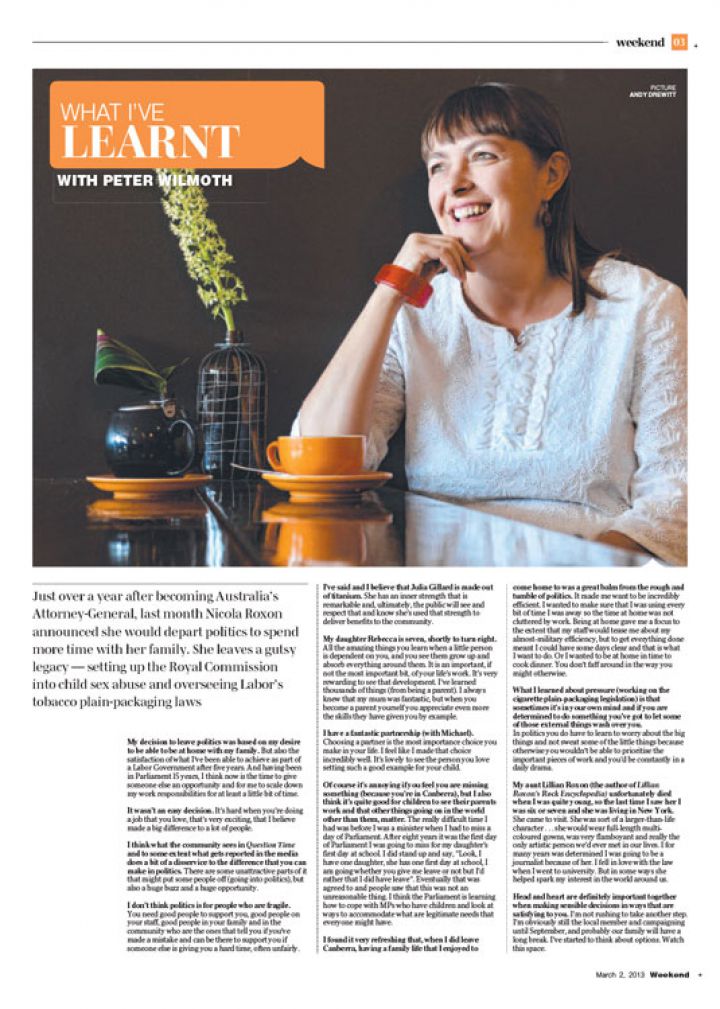 Just over a year after becoming Australia’s Attorney-General, last month Nicola Roxon announced she would depart politics to spend more time with her family. She leaves a gutsy legacy — setting up the Royal Commission into child sex abuse and overseeing Labor’s tobacco plain-packaging laws.